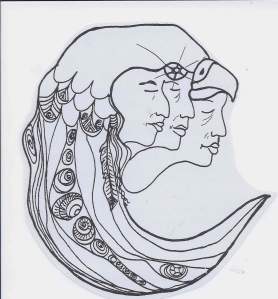 There once were three old women, who were blind to the gray world about them, save that they shared a single eye between them through which to see the world.

In order to see, each blind crone would take turns looking through the shared eye.  They spent their days passing the eye from woman to woman. As each took her turn she would describe the world she saw in living color to the other two.  It was as if each could see clearly through the seer’s eye.

It never occurred to any one of the three to keep the eye for herself.  The world was full of possibilities for each of the women because of the collective vision and perspectives they shared.

One reason I sought to learn about feminist spirituality was to learn how to take God back into my heart, not as the authoritative father or his benevolent son, but as the Mother/ Goddess/ Creator.  This meant reexamining stories, rituals, symbols, and prayers and asking myself, how does this include me and my experience as a woman?

For instance, take the old story about Perseus killing Medusa.

Today, that story has once again been retold by Rick Riordan in his Percy Jackson series for young teens.  My sons LOVE LOVE LOVE this series.  When we watched “Clash of the Titans” with Sam Worthington, they identified each character and knew the myths.

In the 2010 movie remake, Perseus journeyed to find the Stygian Witches to ask how to kill the Kraken coming to annihilate humanity.  The Stygian Witches were grey, frightening, old crones who shared one eye between them.  After Perseus learned he needed to kill Medusa (the witches’ sister by the way), he harassed the old women by tossing their eye out of their reach and making them scramble on hands and knees to find it.

In Greek and Roman mythology, the Stygian Witches were also called the Graeae who shared a single eye and a single tooth. The Graeae were a primitive concept of the Triple Goddess “who was three in one and one in three”.

Throughout the pre-Christian world, you find Triple Goddess in her hundreds of forms: Creator/Preserver/Destroyer, Virgin/Mother/Crone, Past/Present/Future, or Sun/Moon/Star.   The Graeae manifestation of the Triple Goddess was passed down through the play Phorcydes by Aeschylus, part of the dramatist’s trilogy on the life of Perseus.   In the early 7BC versions, the Graeae were young, beautiful and shaped like swans.  By 2010, they have become groveling sorceresses.

The poem asks women to re-imagine the Graeae, the Triple Goddess, within us.  We are now wiser, older; our hair has become grey, but so has Greece and Rome.  And from where I stand, the sky has also turned grey, filled with the pollution of man, the Kraken of our time.

Just like Rick Riordan, who took an ancient play and eight millennium later got it placed back on the bestsellers list, women can re-frame the old stories.

The poem suggests that women work together, sharing the seer’s eye that sees the possibilities, the future, and then applying our magic, describing our vision in living color, bringing it to life.  Not for us, but for our children, the next generation of Perseuses  who will eventually come to us and ask how to annihilate the remade Kraken. 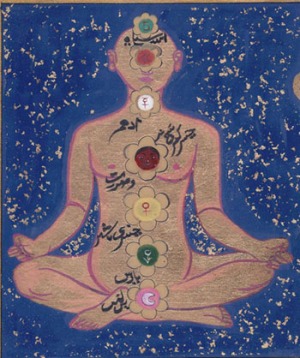