My teacher, and friend, Dr. Sarah Forth is not a New Age channeler for the Goddess.  She earned her doctorate the old fashioned way, by studying theology at Northwestern University and Garrett Seminary.  Her specialty is the Bible’s Old Testament.

Her book, Eve’s Bible, gives some background as to who were Yhwh’s serpent enemies.  In chapter 14, The Lost Goddesses, she writes about the religion from the earliest Sumerian, Syrian, Minoan, Mycenaen, and Indic cultures.

“From at least 7500bce and probably earlier, theacentric (goddess-centered) civilizations throughout the Eastern Europe, the Near East and India portrayed the goddesses as snakes and with snakes as well as bird women.”

More than the mere fertility figure, as male archaeologists referred to these preserved images, she was the  “Goddess of regeneration who was responsible for the entire cycle of life.”

Sumer’s religion from “more than forty-five hundred years ago is among the oldest we know much about,” Dr. Forth writes.  “But it was Egypt, “the Land Beyond the Rivers” that more directly influenced Israelite beliefs.”

(Note: I added the images for the post.  If they are a bit incorrect, then blame me, not Dr. Forth.)

Egypt had a PRE-history even before the dynastic pharaohs.  During this period, Wadjet was the patron goddess of Buto, an important “city” during the Neolithic period.  Wadjet was a cobra.  Her sister Nekhbet was a vulture.

Together, they were called the Two Ladies.

Over time, as the kingdoms of Lower and Upper Egypt were combined, the two sisters started to merge into one.

From 3100BC. The Narmer Palette

The Narmer Palette is thought to represent the unification of Upper and Lower Egypt.  Notice the intertwined serpent heads of the lions.  Wadjet was also associated with Bastet, represented by a cat or lion.

Dr. Forth writes, “Egyptian, Snake Goddess Uatchet (Wadjet) was both a woman and a large winged serpent.”

The Uraeus, a spitting snake/vulture symbol, denoted both goddesses.  “The Uraeus adorned the headdress of pharaohs for thousands of years.” 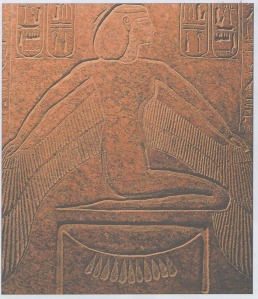 Isis, the winged Goddess from Egypt

Slowly, over time, Wadjet became Isis.  Isis merged with the Goddess Hathor and then became Horus’ mother, instead of his sister.

Over millennia, Western society moved away from earth-based religions.

“Serpents were demoted to servants of the gods, or worse, their enemies,” says Dr. Forth.

It was the Jewish Diaspora who took the ultimate revenge against the Egyptian pharaohs.  They collected sacred stories on papyri that became the Old Testament.  Starting at Genesis, Yhwh’s (God’s) most famous enemy became the serpent, the one in the Garden of Eden who tempted Eve to eat from the Tree of Knowledge of Good and Evil.  Because of this snake incident, humanity was kicked out of Paradise.

According to Dr. Forth, this story “remains the best example of the Israelite campaign against the snake-goddess.  Yhwh (God) reacted by cursing the serpent.”

Because you did this/More cursed shall you be/

Then all cattle/and all the wild beasts

On your belly shall you crawl / And dirt shall you eat/

“Assigning the serpent to crawl on its belly suggests that it had a previous mode of transport.  Wings perhaps?” Dr. Forth asks.

In Moreau’s 1864 Oedipus and the Sphinx, we see the traces of the ancient goddesses: Wadjet, the cat/lion, Nekhbet’s wings, and the female head all rolled into a Sphinx, the “winged monster” Oedipus confronts as he lusts for his mother.

Eve and the Serpent demonstrates the power of a good story.  In Western civilization, Genesis Chapter 3 chopped off the Goddess’ wings and completely changed her-story.

3 responses to “When Snakes Could Fly”