The Jikiden Reiki Kenkyukai lineage is led by Tadao Yamaguchi.

In 1938, Tadao’s mother, the seventeen-year old Chiyoko Yamaguchi (1921-2003), learned Reiki directly from Chujiro Hayashi.  It was a gift from her Uncle as “part of her dowry”.  After her Reiju, she treated her family and friends at her house every day.  Tadao grew up with his mother administering Reiki to him.  He was never given medicine because there was no need.  When he was of proper age, his mother gave him his Reiju (attunement).

In 1999, a Japanese book about Reiki mentioned Chiyoko Yamaguchi.  When German, Reiki Master, Frank Arjava Petter telephoned the house, he was surprised Tadao was friendly towards him.  When he explained why he was calling, he was doubly surprised that Tadao was thrilled a foreigner wanted to learn Reiki from Chiyoko.

In 2000, Chiyoko became the last living student from her 1938 class.  She agreed with her son that it was time for her to teach other what she knew. They founded the Jikiden Reiki Institute with the intent to teach Reiki as a holistic, home-remedy to stimulate the body’s latent healing abilities.  Another critical objective is to reduce dependency on conventional drugs and chemicals helping to reduce medical waste worldwide.  That year, they invited Frank Arjava Petter to Kyoto for five days of Reiki training in the exact way Hayashi had taught Chiyo sixty years before.

Two years later, Frank Arjava Petter received the Reiki Master Jikiden attunement from Chiyoko and Tadao.  He was the first Westerner to do so.

Chiyoko Yamaguchi died in 2003.  Before she left she revealed two, previously, unknown Reiki methods to the world.  In The Hayashi Reiki Manual she explained byosen and Hayashi’s blood circulation technique.

Today, Tadao Yamaguchi continues Chiyoko’s work in Japan.  His classes are in Japanese with a translator.  He travels the world with Vice-Representative, Frank Arjava Petter initiating Reiki practitioners into the higher, Shihan levels.  He published Light on the Origins of Reiki in 2007. 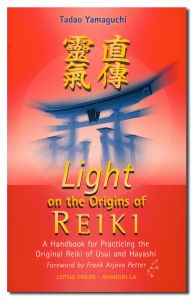 I was fortunate to be given my Shoden and Okuden Reiju by Frank Arjava Petter in 2010.